Dostupnosť
do 2 týdnů
Vydavateľ
Juris Publishing
ISBN
978-1-57823-322-9
EAN
9781578233229
Počet stran
3086
Rok vydání
2011
As of 17 December 2010, the Rome I Regulation (EU Regulation 593/2008) on the law applicable to contractual obligations is directly applicable in all EU Member States with the exception of Denmark. The Rome I Regulation replaces the Rome Convention of 1980 in the EU Member States and will apply to all contracts concluded as of 17 December 2010. However, and herein lies the utility and great importance of this work, the Rome Convention and the Rome I Regulation will be applied in parallel for a significant time to come (the author himself anticipates a ten-to-fifteen year period); in the latter case to contracts made after 17 December, 2010. This is why this commentary takes into account both sources of law, in their mutual interaction and broader context. The comprehensiveness of the Rome Convention / Rome I Regulation is clearly apparent, but one of the great achievements of the author is his amassing of over 1,800 judicial decisions, most of which are furnished with a detailed commentary; where these decisions apply national laws, the latter are cited both in the original and in translation. For a number of rulings, the commentary include not only a case summary of the facts and an analysis of the conclusions drawn by the court, but also takes them as models to hypothesize what conclusions would be reached if the Rome I Regulation were to be applied. 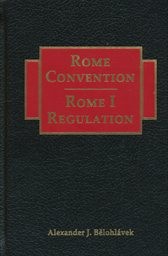 Labour Market Policies in the Era of Pervasive Austerity

Calculation of LTPD sampling plans for inspection by variables

The History and Origin of International Environmental Law